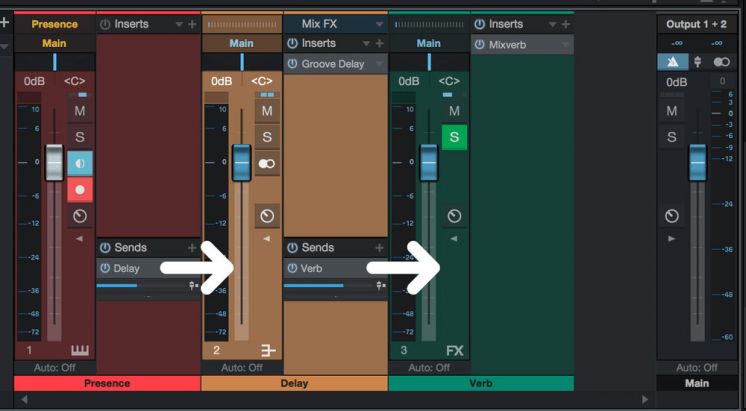 Many people confuse INSERT effects with SEND effects. What are they, and where do you place them in a DAW during a mixdown project?

An INSERT effect is inserted into a track, in series with the track’s signal, to process that signal. Examples of insert effects are EQ, compression, gating, and de-essing.

A SEND effect is inserted into an effects bus, which is a separate channel (or an aux track in Pro Tools) in the recording project. You send some of the track’s signal to that effects bus. The output of the effects bus, which is the processed signal, returns to your DAW’s output where it mixes with the direct signal from the track. Examples of send effects are reverb and echo. 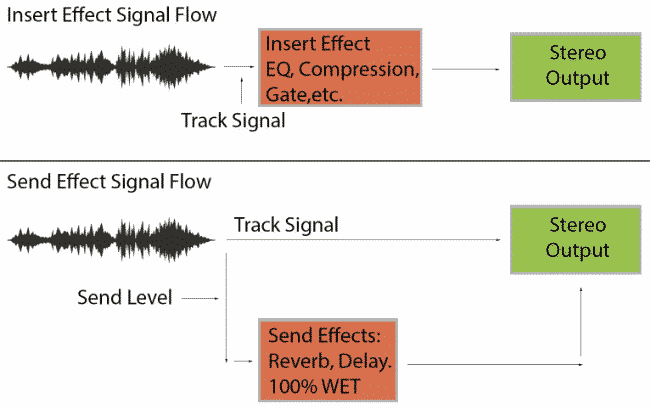 top half of diagram, shows the signal flow for an insert effect:

In the track I/O settings, set the track’s output to either the stereo output bus or to your audio interface output channels.

bottom half of diagram, shows the signal flow for a send effect:

In the track I/O settings, set the track’s output to either the stereo output bus or to your audio interface output channels.

Some engineers like to use parallel compression. You place a compressor plug-in with extreme settings into an effects bus. Then you can control the amount of compressed sound — from clean to squashed — with the Send Level going to the effects bus. But normally a compressor is used as an insert effect.